Nashville in Harmony would not be possible without its amazing membership. Our community (or as we often like to call it, our framily) is an intergenerational group of people who care about each other and drive the mission of our organization. Their voices define who we are. Please read some of our members' stories below. 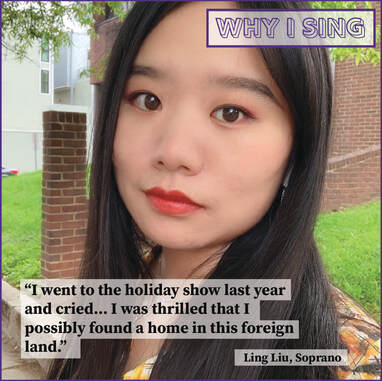 My name is Ling, and I’m from China. When I was in Beijing doing my undergrad school, I joined China’s first LGBTQ and Allies chorus—Beijing Queer Chorus, also known as BQC, to sing for my friends in China. Although being part of the community has been officially legal and non-pathologized for more than 20 years, Chinese people in general hesitate to show support to the community due to historic reasons, just like anywhere else in the world. BQC received a lot of help from some choruses here in the States, which made me think that people here were, in general, super supportive to the community before I came here.

Last year, I came to Nashville for grad school. Not long after I started school here, a friend who is Chinese and gay, told me something terrible. The other day after he hugged another gay friend goodbye, a man came up with one hand on a pistol on his waist and asked if they were dating. My friend denied in panic, and the man left after a suspicious glance. Not long after that, there was a lady who showed me her church choir and asked about my chorus experience. I, of course, mentioned BQC, and she told me she didn’t believe that two men living together would gain happiness. Several frustrating things like these happened in first few months in Nashville, which made me even give up for a while on finding a chorus to join here. Close to the end of my first semester, an instructor at school introduced NiH to me. I went to the holiday show last year and cried during the show—not just because I missed my BQC friends, but more of, I was thrilled that I possibly found a home in this foreign land.
​
So, I joined NiH last spring, and have been singing proudly with everybody. In addition to our own shows, there are also many outreaches we can go for, which I see here as supportive attitudes toward the community. More importantly, I hear confidence for being ourselves when I’m singing with everyone. Frustrating things still happen sometimes, but only make me feel more encouraged to sing. And reflecting on my experience in both choruses, I think that in spite of so many differences—history, culture, and even time—among different parts of the world, the nature to sing and to fight for themselves, friends & families, exist in common in humanity. My life still holds a lot of uncertainty, but one thing I’m sure about is that wherever I will be in the future, I will never stop singing for a better world. 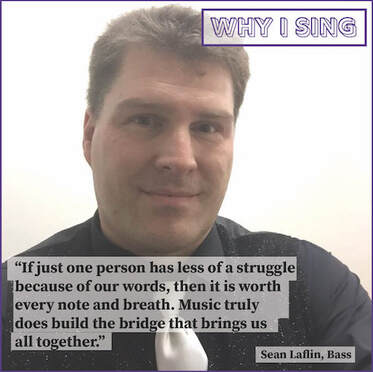 I truly believe in the mission of this choir... building community and creating social change, but to me it’s much more than that.  Nashville in Harmony is my family.
​
I first joined this choir five years ago and I have made friends I never would have met were it not for this group.  Since then I’ve seen some come and go… and thankfully seen some come back.  So this isn’t just so much ‘Why I Sing’ but ‘Why I keep singing’….

What brought me to this choir was a result of therapy sessions and my counselor advising me to find and build my support structure.  Some of you may know I was once married, yes to a woman, and I’m a dad.  I have two wonderful sons that I only get to see part of the time and yes that crushes me… but I digress…

In my divorce I lost a lot of my friends-- quite honestly really nearly all of them.  I won’t detail all the things that happened in my somewhat messy divorce but through the process I discovered I was suffering from anxiety attacks and didn’t even know what they were-- I hadn’t had them before the unraveling of my marriage.

Turns out I had been suffering from years of repression and depression along with the new anxiety attacks.  I had been so far in the closet, hiding so far back I was behind the drywall for so much of my adult life, denying my true self. In college I thought maybe I was ‘bi’, but that isn’t what everyone wants me to be—I’m supposed to have a wife, the 2.5 kids and the big house with a yard and a dog.  Well, I have the kids and a dog now….

I had grown up in a Christian family and we had another “gay cousin” and I always thought I was nothing like him.  I had heard my parents refer to the “fruit loop” and “fairy” and other limp-wristed monikers… and I convinced myself that wasn’t me too.  Now I don’t want you to think too badly of my parents; they are really the only ones I can truly count on now—they were highly supported of me through my divorce—basically helping me start all over again, and my Sunday School Superintendant father actually has paid for tickets and donated to our organization even though they’ve still yet to come to a concert…. Again I digress….

After several sessions my therapist pointed out to me that I didn’t know who my supporters were, I didn’t feel like I had any friends anymore and didn’t really know anyone going through what I was.

Having just come out in my 40’s. I was just now discovering who truly I am.  Like I said, I lost friends and some of myself in my divorce and coming out.  I had sung in my hometown church choir in Kentucky for years and missed that sense of an extended family.  I wondered… so this is Music City….

Google led me to Nashville In Harmony. I emailed and found out auditions were coming up soon from this awesome sounding person named Judy.

I tracked down the NIH booth at my first-ever Pride where this bright spirit Judy hugged me… I met the Director Don and some of the other members and I felt something that told me this was where I was meant to be.
I did my “vocal interview” and worried whether I’d get in… I really wanted to be part of this group not knowing then just how much it was going to affect me.  Thankfully y’all neede-- and still need-- more basses. So when I found out I made it, I was so happy.

At the first practice as a ‘newbie,’ I knew right then and there this group was something special.  The mission behind why we sing motivates me even more to be part of the change, teaching tolerance and love.  Given our current political climate it seems our message is needed now more than ever.

When I first joined this choir, after misty-eyed moments of “Why We Sing” I knew at last I found a group where I feel like I belong. Being a part of the start of the “Major Minors” is something I will always be proud of and so happy that it has become a part of this choir’s mission.   Seeing those kids become the family that they have gives me hope for the future. I know I had nothing like that when I was younger and I don’t know if there was for me back then whether my life now would be different… but I think for those kids, the world is a little bit better place.

But I do know this now.  I am gay.  Those were hard words to say the first time. But it’s gotten easier and I own it now. I am gay. I’m out. I’m a proud gay divorced day who sings in an awesome choir.

I really do believe in our mission.  If just one person has less of a struggle because of our words then it is worth every note and breath.  Music truly does build the bridge that brings us all together in this city, this state—even our planet.  Being a Kentucky boy I truly believe “United We Stand, Divided We Fall”.  Like singing bass is often the foundation of a song, so too do I wish to hold up my part to make the harmony of humanity.  Singing frees the soul. Our music can make a difference. Together we lift every voice and people hear our harmony.  Our melody can make it better.

All have you have done it for me.  I look forward to every Sunday Singing because I’m with all of y’all and we’re in it together.

This is why I keep singing.

This is why I sing.